(you probably haven’t heard of)

When it comes to ecotourism destinations in Patagonia Argentina, the most likely destination that you’ll think of is Península Valdés. And that’s just fine, because it is an amazing destination for ecotourism and fauna sightings.

The thing is, it is not the only one. There are other super interesting destinations to do ecotourism in Argentina’s Patagonia you probably haven’t heard of yet.

Here, we’ll tell you about five destinations we visited in one of our latest trips to Argentina’s south region. They are all placed along the Atlantic coast, in Río Negro province, right where Patagonia begins. 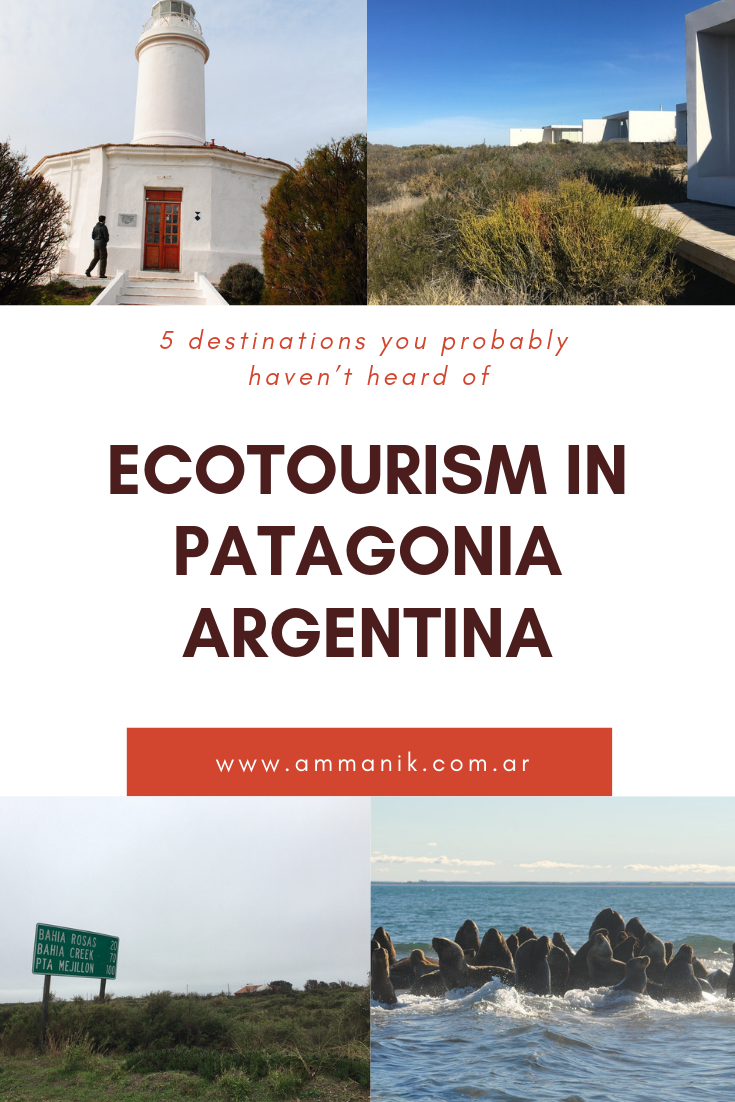 Both Viedma and Carmen de Patagones are cities which were founded together, over 200 years ago. They are separated by the most important river in Argentina’s Patagonia: the Río Negro river.

The two cities are ideal places to stay for a while and visit the closest natural attractions.

We decided on picturesque Carmen de Patagones, with its ancient buildings, stone paved streets and slope to the river.

We stayed at the Casa Crespo hotel. An old large house, it has been carefully revamped and turned into a boutique hotel. Its location is excellent: miles away from the Río Negro river and a few minutes from Carmen de Patagones downtown. Apart from offering breathtaking river views, the hotel houses a very pretty restaurant (open to the public). 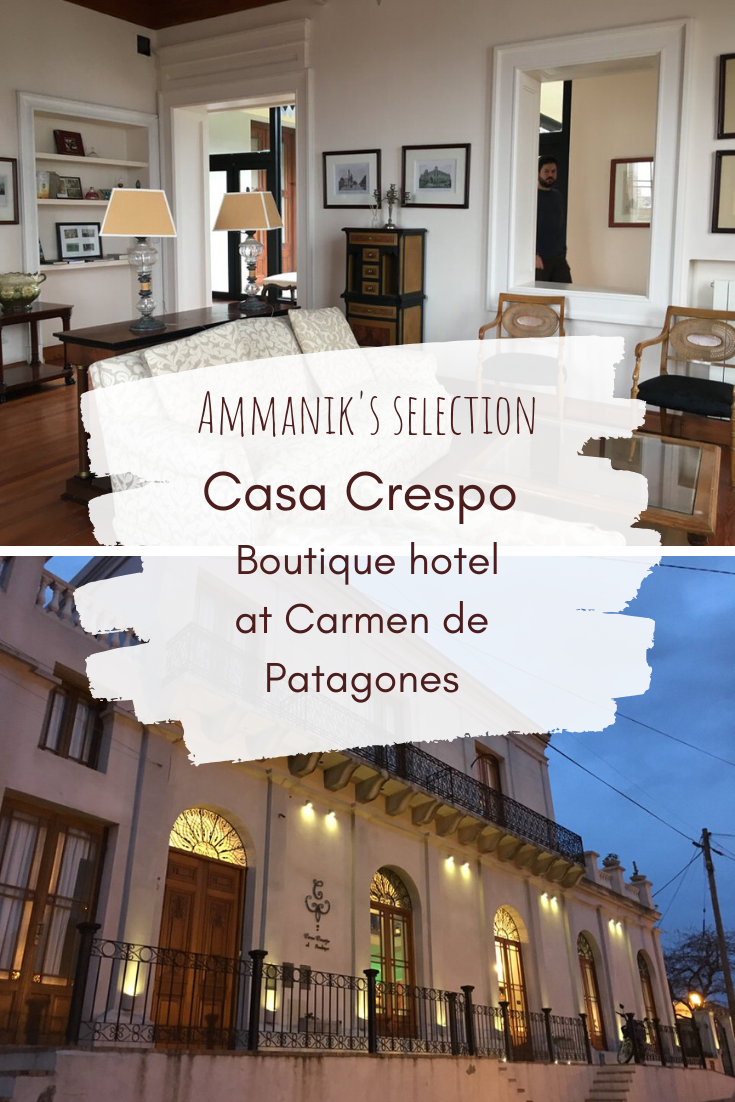 Casa Crespo offers free bicycles for guests, so we decided to ride along Carmen de Patagones’ promenade and pedaled 5 km in a dirt road till we reached the maragatas caves, excavations made by the first Spanish settlers to live in, as they lacked materials to build more comfortable dwellings.

In the road to the maragatas caves, we stopped to climb La Caballada hill, with its impressive panoramic views of the Río Negro river and the two cities.

Viedma is the site of departure of the Patagonic train, crossing the Patagonic steppe and reaching Bariloche. This is a fantastic journey, connecting by train the Atlantic coast with the Andes mountain range.

📍Getting to Viedma and Carmen de Patagones from Buenos Aires

For the time being, the train that departs from Constitución station, in Buenos Aires, finishes in Bahía Blanca.

From Bahía Blanca, there are still 300 km left to get to Viedma. You can either rent a car or take a coach.

Nowadays, Aerolíneas Argentina is the only one company flying to Viedma. It offers a daily afternoon flight, five days a week (every day except Tuesdays and Thursdays), departing from Aeroparque.

This charming sea town is 30 minutes away from Viedma and Carmen de Patagones.

📍Getting to Balneario El Cóndor

You may get there by car or by coach from Viedma.

Ceferino is the name of the company that makes the journey all year round, although the route changes in summer season.

🤔 Things to do at Balneario El Cóndor

This is the place where the typical Patagonian cliffs first make their appearance.

And it is right on these cliffs where you may watch the world’s largest burrowing parrot colony, with around 35,000 active nests.

Another attraction this town offers is its location, right when the Río Negro river flows into the Atlantic Ocean. The unique landscape acts as an invitation to stay and enjoy for hours.

The convergency of different environments (river and sea) turns Balneario El Cóndor into an ideal site for bird watching and trekking.

A good idea is trekking along the Sendero de los acantilados (Cliff’s trek). It is a 5000-meter path connecting different environments, scenic viewpoints and cultural sites, such as the Ceferino Namuncurá viewpoint, the Río Negro lighthouse and the Malvinas Memorial. 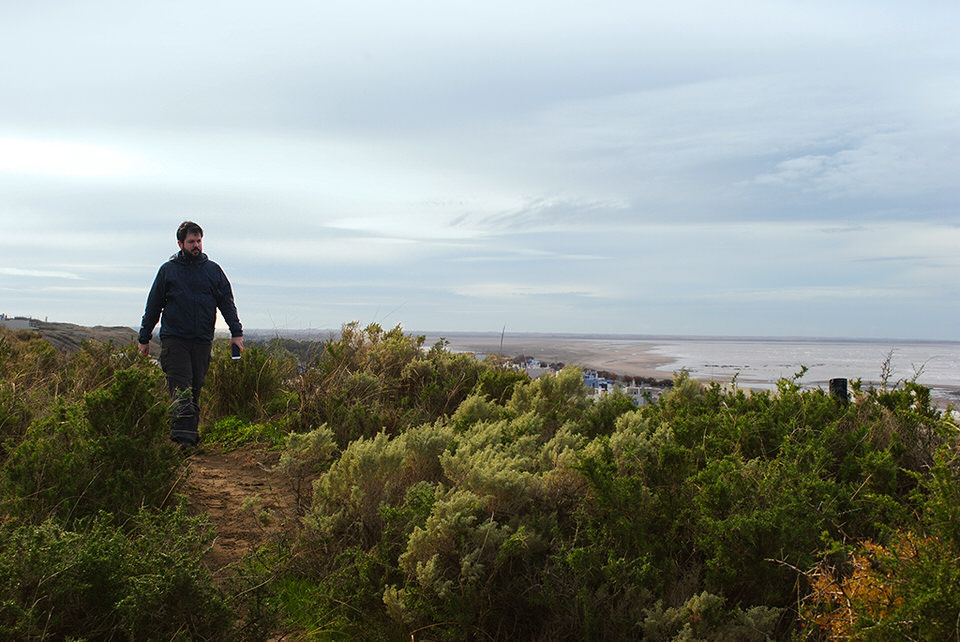 👣The importance of ecotourism at Balneario El Cóndor

Even though the town is an area of importance for bird conservation (AICA) and an ideal site for sustainable ecotourism, it still focuses on traditional and beach tourism, without proper environment control.

From an environmental standpoint, this means it is quite an unprotected area.

That is why we insist on the importance of more thoughtful and nature-loving travelers visiting these destinations.

Your trip is a way of declaring the importance of preserving Balneario El Condor’s natural heritage, as well as Río Negro river’s estuary and another ecotourism destination that may be visited from there, known as ruta de los Acantilados o Camino de la Costa (cliff’s path or coastal road).

The best means to do the journey is a 4WD vehicle. Anyway, it is advisable to check the route conditions before departing and having enough daylight hours to drive safely through the gravel path.

You can check at Balneario El Cóndor tourism office, with their super nice staff.

The Camino de la Costa is a panoramic route because it goes along the edge of Río Negro province’s Atlantic coast and offers stunning views.

Besides providing access to different beaches, it has two natural reserves for marine fauna sightings.

At La Lobería, there are sand bars which form natural pools, ideal for families travelling in summer and willing to enjoy marine nature.

Bahía Rosas and Bahía Creek are two lonely beaches, which are wide, open and beautiful, ideal places for resting and enjoying their beauty and quietness.

At this point, you will start to notice the presence of sand dunes, characteristic of the coastal landscape dynamics.

But it is not only the landscape beauty, with its cliffs and lonely beaches, what makes this destination so special.

Its great biodiversity, ideal for ecotourism, is another of the wonderful things this destination has.

Created in 1971, this coastal-marine reserve purpose is to protect one of the world’s largest one-hair sea lions continental colonies.

At the reserve, you can watch the seals from the viewpoints built on top of the cliffs, from whence you can get fantastic views.

Besides, the reserve has a very interesting interpretation center that you can visit. When we traveled, the reserve was closed for repairs.

Anyway, it has reopened to the public. It opens daily from 10 AM to 6 PM.

The visit takes about 1.5/2 hours, including the viewpoints and the interpretation center. It costs around 100 ARS per vehicle.

What does it protect? A rich biodiversity of invertebrates, esparto grass meadows and migrating birds.

Being an intertidal zone, an area that is above water level at low tide and underwater at high tide, it has great biodiversity richness.

Sand dunes are a living dune system moving by means of the wind and the sea.

That’s why, if you visit the area by yourself, it is very important to check the route conditions before setting off and having enough time to go through this part with daylight.

We weren’t able to reach Caleta de los Loros due to the route conditions.

We were only able to get to Bahía Creek and then back to Balneario El Cóndor, in order to head to another of the ecotourism destinations we recommend you visit in your next trip to Argentina’s Patagonia: Las Grutas and Bahía San Antonio.

In Argentina, Las Grutas is a popular beach summer destination. But it turned out it’s much more than that.

There, we discovered a destination with plenty of biodiversity and a wonderful place for bird watching, not only including Las Grutas, but all the towns in San Antonio Bay.

All of San Antonio Bay, from Baliza San Matías –close to Puerto del Este– to paraje El Sótano –some miles east from Las Grutas–, is a natural protected area of great importance, since it protects and preserves all the environments where numerous birds, resident as well as migrating, breed, rest and feed themselves.

In 1993, San Antonio Bay was included in the Western Hemisphere Shorebird Reserve Network as a site of international importance.

The most typical species, symbol of San Antonio Bay, is the Red Knot (Calidriscanatus rufa), which can live up to 20 years and fly the distance from Earth to Moon and back throughout its life.

For bird lovers, March is the ideal time for sea migrating birds watching. But if you don’t travel just to do bird watching, San Antonio Bay can be visited throughout the year. We traveled in July, and really enjoyed the place.

We stayed at Médanos Patagonia, a sustainable ecotourism hotel offering a modern and minimalist lodging experience in full harmony with the environment. 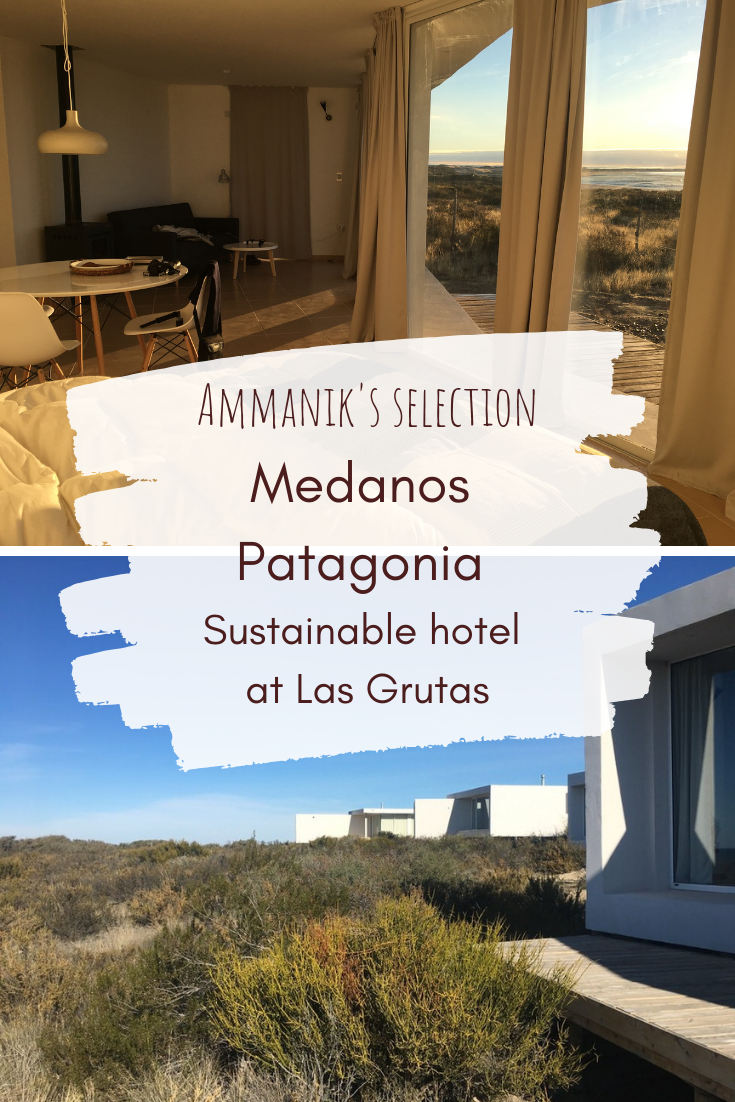 Apart from having a vision and being clearly committed to preserving the surrounding area, Médanos Patagonia offers unique views of San Antonio Bay.

Besides, since it is an apart hotel, each of the rooms has kitchen facilities and will make you feel at home.

Enjoying a starry night looking at the sea, with a wood-burning stove, a good book, while writing your trip journal or looking at the pictures taken during the day… what else could you ask for?

Anyway, there are loads to do during the day… outdoors!

From interpretation trails to discover and understand the local ecosystem, and birdwatching outings with expert guides, to hand loom workshops with local mapuche women.

And it doesn’t end there, since you can also visit:

At San Antonio Oeste you can visit the Jacobacci Museum, devoted to this area’s natural sciences, archaeology, ethnography and history.

You can stroll along the promenade and behold San Antonio Bay.

Tidal dynamics can be better appreciated near the deck. And, as the bay experiences two high tides and two low tides daily, you will see ships both floating in the water and running aground.

If you are a fan of fish and seafood, San Antonio Oeste is an ideal place to taste local cuisine.

Traditional fishing is one of the historical economic activities of San Antonio Bay’s towns, and that’s the reason why you can get super fresh fish and seafood.

But if you’d like to see marine fauna closer and from the water, San Antonio bay offers fantastic sightings.

We took a boat trip at Puerto San Antonio Este, another ecotourism destination we strongly recommend you visit.

“Puerto del Este” (Eastern Port), the name given to this town by locals, is about 60 km from San Antonio Oeste.

This deep-water port is the point of departure of fruits and vegetables produced in Río Negro province and exported to the world.

This town also has quiet wild beaches, which are a must in summer.

In San Antonio Bay, you can see different dolphin species, one-hair sea lions and several birds. Besides, between August and October you can see the Southern right whale.

Since marine fauna sightings are done within the natural protected area, they are responsible sightings. Provincial laws regulate the sightings and they are held in small semi-rigid boats with a carrying capacity of no more than 10 people.

The sightings are very quiet and enjoyable.

Besides, with good weather, like we had, they are an unforgettable experience.

Finally, we share with you a marine fauna calendar for sightings in San Antonio Bay.

For you begin to plan your trip to visit all these destinations and have the chance to discover these spectacular destinations to do ecotourism in Argentina Patagonia.

PreviousBiking In Buenos Aires: All You Need To Know